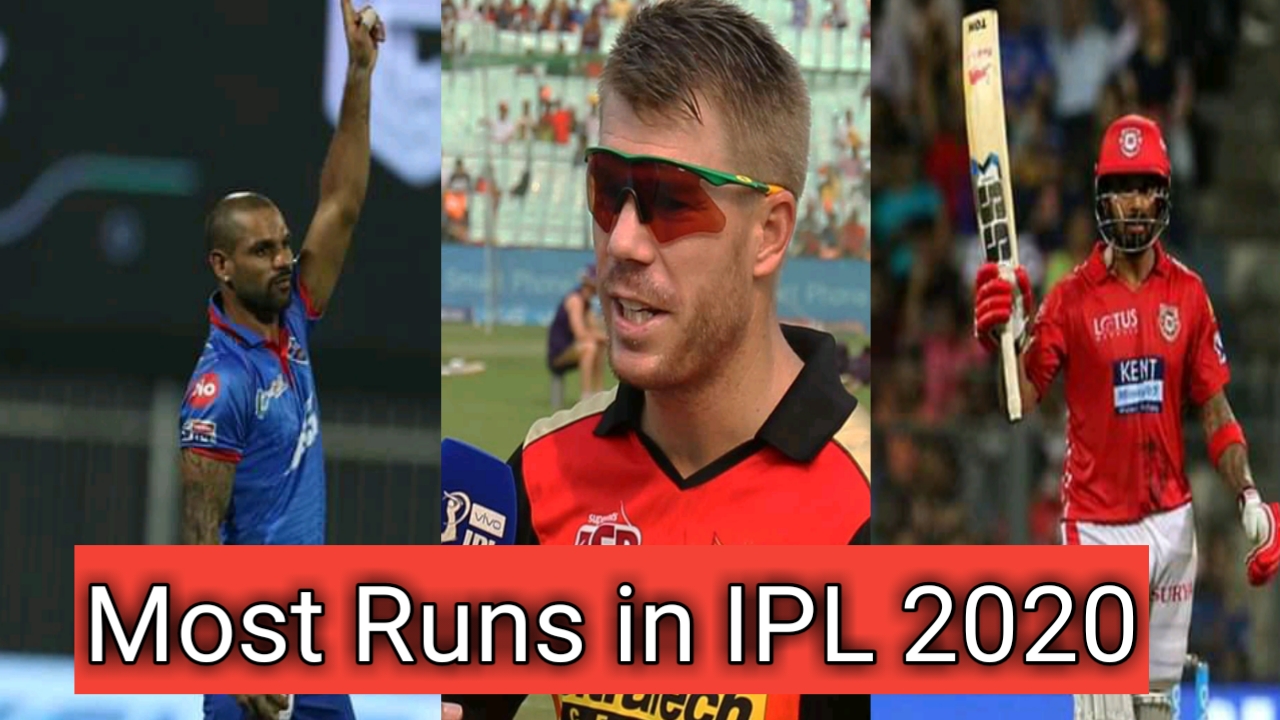 There are plenty batsmen who have got the fame just because of IPL. The such league has made many cricketers superstars as KL Rahul, Ishan Kishan, SuryaKumar Yadav all became after playing IPL.

In this article we are going the disclose the batsmen who are most runs in IPL 2020 season holders. We are going to discuss few names with their number of runs including matches.

Cricket is being played all over the, previously Pakistan also held its important tournament of National T20 Cup where also batsmen got most runs.

KL Rahul is one of the most consistent batsmen in IPL alongside David Warner. They both are as good as you might need to have in your team. They get 500 runs in every season with ease.

KL Rahul has been getting 500+ runs in every season of IPL since getting his name among top Cricketers. He has played 14 innings in IPL 2020 and have made 670 runs.

Shikhar Dhawan has got 2 centuries this year. Most for any player in this season. One of the reason why he has been belonging to this list.

He didn’t have better season this year in initial matches but got his form back in the middle of the season and got couple of fifties and centuries to get going.

He is perhaps most consistent cricketer in the history of the IPL. However bestest ever overseas. His record speaks itself. he makes 500+ runs in every year with much of ease. He has scored 548 runs in this season after playing 16 innings for his side.

He is Delhi Capital’s captain since few seasons now, is the part of Indian national team. He plays so smartly in every tournament. IPL is just example of that where he has scored 519 runs in just 17 games he has played. His team did very well in this year’s IPL 2020.

He has scored 516 runs after playing 16 matches.

South Africa’s skipper is another batsman who belongs to same list after getting as many runs as Ishan Kishan has. He is wicket-keeper batsman for Mumbai Indian. Plays regular at opening slot.

He is one of the most successful young Cricketer we have seen in this season. He also got some praises from his captain Virat Kohli after they got out of playoffs while playing match against Sunrisers Hyderabad this reason.

He was looking most dashing and brilliant batsman. He scored 473 runs after playing 15 innings in this year’s IPL 2020 season.

He is used to get his team over the line on the most number of occasion but he has failed this time. He hasn’t got the score his team wanted.

He scored only 466 runs after playing 15 innings. The numbers are very less as compare to his influence.

He is another from Mumbai Indians’ team who has got all the fame altogether this season. He is scoring the runs like fun especially in the middle order.

Considering the fact that usually middle order players don’t score those many runs in any kind of tournament but he has been kept on scoring runs.

He has scored 461 runs after playing 15 innings so far.

Ab De Villiers is most consistent foreign player any team can get. He is stylish and perfect match winner for any team.

He has won 4 games single handedly for his team this season. Playing in middle order and getting these many runs isn’t easy but he has made it looks really easy.

He has scored 454 runs after playing 15 innings in the tournament.

He started it really well for CSK, he was ruling the season with the bat but he couldn’t continue the form just the way he was playing in initial matches and lost the top position. Yet he has scored most runs for his team even though he didn’t play all matches.

He scored 449 runs after playing only 13 innings for his team.

Shubman Gill is legend in making for team India. Already have made his name among top cricketers. He is top scorer for Kolkata Knight Riders. Expected to get bigger auction next year.

He has scored 440 runs after playing 14 innings for his team.

The stats have been taken from ESPNcricinfo

We have mentioned top 12 cricketers in the list because we wanted to encourage youngsters like Shubman Gill who has done a tremendous job at such an age. He seems brighter future for India in all formats.