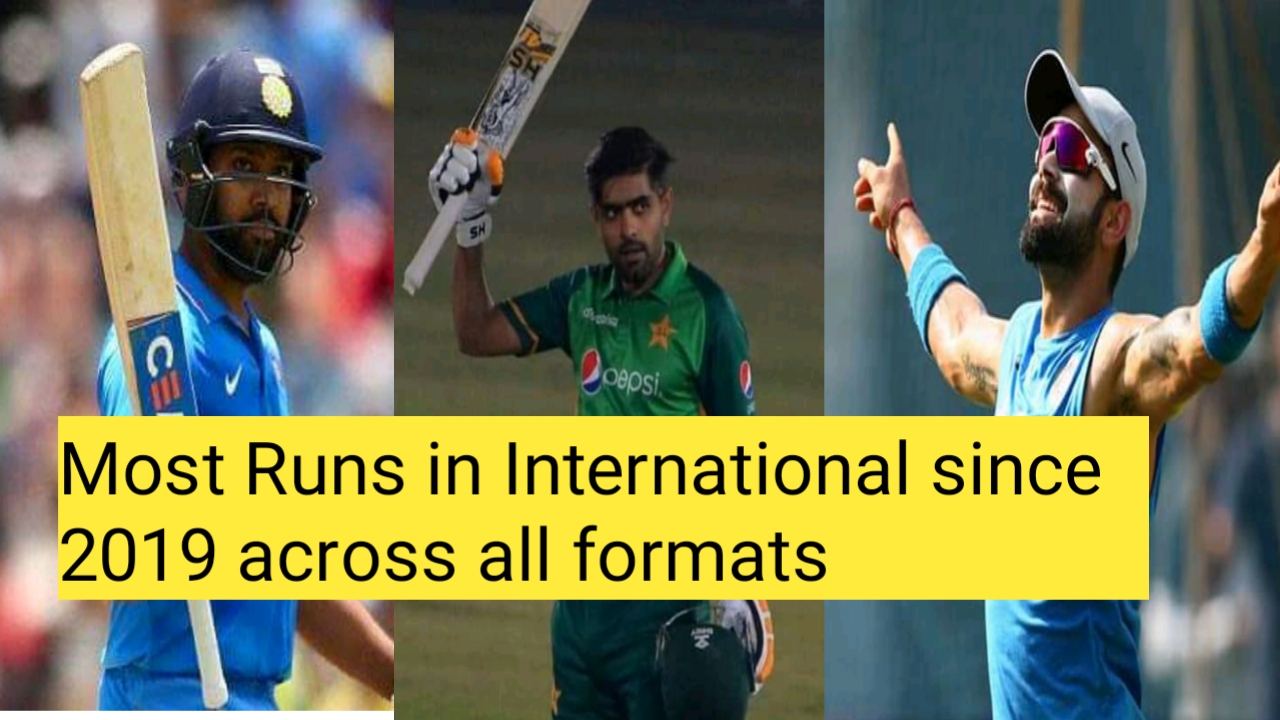 Most runs since 2019 across all formats. Cricket have seen some brilliant players since 2019. Some of them have got most runs since 2019 in men’s cricket. Not only they have got the runs but also have offered their presence over fans’ demand. Who doesn’t want their favorite players to stay out and get the score as much as they could.

It has happened similarly here as some batsmen like Virat Kohli, Babar Azam and Rohit Sharma have shown what they are capable of. Although it is normal thing for Virat Kohli who has been doing it for the ages now but what has brought a change here is, Babar Azam.

Babar Azam has brought a change in normal routine after overtaking Virat Kohli is most runs since 2019 in men’s cricket. He has got the positive impact in his performance. So does PCB has rewarded him the Test captaincy although he was already a leader in white-ball cricket for Pakistan.

Getting this wonderful honour isn’t just cup of tea, though it is his dedication, the brilliance and hardwork which brought him here. Some other notable Cricketers are Rohit Sharma and Quinton De Kock who have made into this list. Babar Azam, Virat Kohli and Rohit Sharma also scored most run in ODIs in 2019

Babar Azam has scored as many as 2917 runs since 2019 for Pakistan across all formats after playing 56 innings. He overtakes Virat Kohli while playing against Zimbabwe in T20 series when he got wonderful 51 off just 22 deliveries.

He is smashing the ball like fun. Have nothing to do except getting as many runs as he could, which makes him even better player. Pakistan have a solid Batsman after so many years.

Talking about his brilliance isn’t unknown to anyone. He is emperor at International level since last decade. He has been doing it quite easily that’s why his name is already mentioned above the highest valuable cricket. His popularity in world already has crossed many legends. He has scored 2912 runs in 62 innings since 2019 across all formats.

Rohit Sharma is another sensational character who likes to play white ball Cricket. His Test record hasn’t been up there but his bat still talks in that as well. He is changing his gears in Test format since last year. He was struggling to make a place in Test format for team India just few months back but after making into XI, he has got everything right on the top.

Overall he has got 2753 runs in 54 innings he has played since. He also hold the record of most centuries in single addition of the World Cup in 2019 last year.

Joe Root has played most number of matches since 2019 but occupied the fourth place in this list after getting 2437 runs in 65 innings.

South Africa’s skipper and a wicket keeper is enjoying his brilliant time with the bat since 2019. He is right up there with most runs from any South African batsman since. He has scored 2318 runs in 53 innings he has played so far.

All the mentioned players are the main players for their teams. Fans are enjoying every a bit of their performance due to their responsibility they have taken seriously. Special mention for Babar Azam who has got the eyes of every cricket fan across the world.